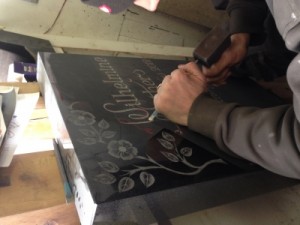 Davis Memorials was established in Pershore, Worcestershire in 1841, moving to Cradley Heath in 1861 and to the present works in Old Hill in 1899. The company was established by the Davis family, running through 10 generations, until a partnership was formed between Charles Davis and Peter Lowe in 1982, and has continued to be run by the Lowe family, now including a second generation.

Davis Memorials expanded its outlets in 2001, now operating from two sites, the second being in Kidderminster.

Choose from over a hundred
designs or we can create one
bespoke to your needs.

ProTec Arts is a revolutionary
memorial paint with a unique
10 year warranty.